Was this my last Missouri hunt, God only knows, but I plan to keep in touch with Kyle and Frank.  Maybe next fall, I’ll try to leave North Pole earlier in the year and shoot a turkey for my Holiday Table!!

As the years roll together, and we grow older, we reminisce of hunts gone by.

Those hunts where nothing was harvested except the smell of oaks trees, the morning sunrise, and the sight of the sunset over the fields of corn still bring a warm feeling to the soul.  That was where my thoughts went back to this last spring— deer hunting in Missouri.  I had hunted whitetail deer in that state way back when I taught school in 1984, then again after returning from my Military deployment to Iraq in August of 1990. My first season I was unable to harvest a whitetail.  Seven years late, I chose to harvest a short racked spike in the knee deep mud.

Through conversation with friends and acquaintances, I mentioned a longing to revisit the deer of Missouri.

A retired 1st Sgt acquaintance who works for OUTDOORS INTERNATIONAL had a friend who was going to open up a section of the Missouri Ozarks for a DIY hunt.  We got in touch with each other, found lots of things in common, and low and behold I was then planning a hunt just NE of Branson, Missouri with Dalton Armament.

During the late summer and early fall, as I prepared for my deer hunt, the outfitter mailed numerous trail cam photos of deer and wild turkey on the property.  Several were shooters easily in the 125 inch class-mostly 8 tines with a few having 10 points.  Including one that had broken one side off and had that “old man belly” and the look of an above average body weight and age class.

Fast forward to Nov 11, 2016, I meet with Frank (property owner/manager) and we look over the tree stands

They had stands to accommodate anyone.  Bow stands—had three; lever action or handgun—had it covered with tree stands in heavy cover with small food plots

.  Bean field (hay field) shooters had available a tower stand 14’ off the ground with a view from 45 meters to over 370 meters.  A “Honeymoon” stand- 12’ up on a platform 8×12 foot square enclosed with shooting windows to the front and both sides.

After a good meal in town of Forsyth, I decided opening day I would hunt the hay field.

The first deer spotted was a buck…big body, wide of horn and at the far, far end of the field. Too far to count tines (note: there is a 4 point on one side rule by the land manager).  I let him walk.  Next out was a doe; dainty and cute.  And suddenly it was time to leave the stand and get a quick lunch, a nap, and get ready for the afternoon hunt.  2 p.m. found me once again in the same tower stand.  20 minutes later turkeys came out in front, giving me a show.  A spike suddenly darts out from my right and eases along the trees to where the birds were. Almost an hour passes before another deer (again a large spike), and then three nice healthy looking does followed.

It’s now 5:15 p.m., I spot a movement at the far end, another spike and a doe emerge from the far right end of the field.

As I am watching them, I catch a movement in the cedar trees far right about 350 yards.  I pick up my binos to investigate – IT’S A BUCK!  I only glance at one side—can’t count tines, just see a mass of bone and good height.  Immediately go into shooting mode; then discover I must be taller than the person whom set up the stand.  The safety rail is way too short for a rest. Go into a sitting position on the deck of the platform, and then to adjusting scope for a long shot.  He is facing me- not a good angle, he moves out onto the edge of the field under a cedar limb.

I watch as he makes a scrape and then a licking branch above it— still facing me.

He turns to his right slightly and my crosshairs are now on the front crease of his left shoulder.  I adjust for 15” of bullet drop and then have to wait— he has turned back to face the stand.  He takes a step toward the field edge once again, then turns back to the licking branch.  This time the rifle settles in on the target and a gentle nudge of the trigger sends 180 grains of lead at 2950 feet per second from my 308 WSM downrange.  I see him turn and run.  No drop, no hunch up, no falter……

I wait 15 to 20 minutes for my heart to stop pounding doubt of my shot through my chest.

Then climbed down from the stand and started the fateful walk to where my quarry had been standing.  What I would find— nothing- a miss, white hair from too low a hit, blood from good lung shot?  As I get closer to the licking branch—I SEE A DEER laying under the cedar’s main beam- still in the grass.  Then the antlers appear to be 2 feet tall in the grass. From where he was standing to where he expired was less than 12 feet— 4 very short paces.  I call Frank and ask about getting this grand specimen out of the field with his truck.  Within minutes a small crew had surrounded me and were congratulating me on the good Ozark buck that lay at my feet.

The buck— eleven scorable points, lots of smaller extras, over 17 ½” of inside spread with heavy mass, and a field dressed weight at 215 lbs.

The meat will be enjoyed this winter, and soon the antlers will hang on my wall for me to glance at occasionally and remember the turkeys in the hayfield, the smell of acorns on damp ground, and even the super moon

that was visible during my sitting a deer stand and reminiscing of hunts in years gone by this past fall. 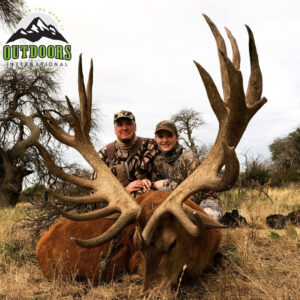