First of all, good for you for considering a self-guided moose hunt. This year was our first experience with an unguided hunt in Alaska and they did a great job for our party. During our layover in Bethel, Alaska we meet several clients that had been out with them for multiple times already and were coming back again because the moose hunting is good and he and crew do a good job.

1. Learn how to call moose, watch the videos. Calling is key!

We called in our moose using a combination of cow calling and raking a lot of brush. We used the Bull Magnet Moose Call, worked great. We took a moose decoy, we set it up several times but didn’t have it setup for any of the moose we shot, probably not necessary.

I would suggest a Satellite phone or even better, a Garmin inReach

(we like the Mini) that you can text with, we had both. They were handy to keep in touch with the Outfitter once we had moose down and ready to pick up. We took a Globalstar

phone and it worked great.

We hunt in the backcountry in Idaho, and never use a GPS much because we have pretty good directional sense. We took Garmin Rhinos and they came in very handy. With the overcast weather, totally flat country and lots of brush we got turned around several times but thankfully had the GPS to straighten us out quickly. One other thing on that is before we left I bought a terrain map through Garmin and downloaded it onto my GPS. We had no vantage points so it was very handy to use it to see the terrain around you, distance to other ponds, lakes, sloughs or meadows. Make sure you have a charging system or take lots of batteries they go through batteries quick.

We had to pack our animals for quite a ways so we cut our quarters in half so they weighed 70-80lbs.

3. Should we provide our own camp or use theirs?

On our self guided moose hunts in Alaska, we took all our own camp and food, we shipped it all up. Preparing was a bit stressful, but it wasn’t that bad. It probably ended up being about the same cost as using their gear, maybe a little more, but is was also nice having your own stuff.

Their gear looked nice and would work fine and probably much easier than organizing and shipping everything up. If you plan on taking your own food don’t buy anything in Bethel, it is very expensive. No booze in Bethel, bring your own if you want any, if you don’t want it it’s a good gift to leave with some of the Outfitter’s people that help you.

The weather we had was actually pretty nice 25-55 degrees, some rain, no snow, we were not weathered in any days. From everything I’ve heard it is not normally that nice so be prepared for anything.

In the area we were put good waders

were key, we wore them everyday. It was WET. In discussion with some of the other groups they hardly ever used theirs, so not sure what to tell you on that. It depends on where you get dropped.

6. After the hunt, how did you take care of your meat and trophies?

Once being pulled out of the field, their crew made it very easy for us to take care of our meat, horns and capes. They took us right down the street where we shipped it to anchorage and it went out that day. The racks and capes went to a taxidermist where they are being cleaned and capes tanned and then being shipped to us. We gave half of the meat to locals (they were very grateful) and sent the other half to Anchorage where it was processed and then shipped to us. 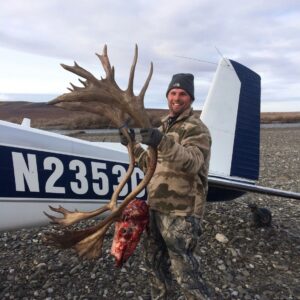