Brent Martell is one of the most successful wolf hunters we know of. He has successfully taken multiple wolves with both bow and rifle and in this podcast he goes in depth teaching us some wolf hunting tips so we can do the same. We talk about how to decipher wolf sign, find “howling points, wolf pressured elk hunting strategies and how and when it is a good idea to switch an elk hunt to a wolf hunt. 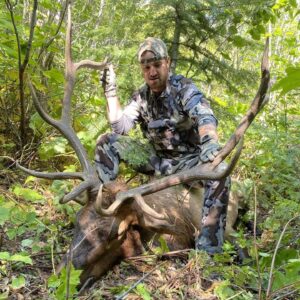 How to Hunt Wolves

Wolves are tough to find, a lot of stamina and patience is involved in hunting wolves.

Another difficult aspect of hunting wolves stems from the fact that wolves do a lot of their own hunting at night and currently both Montana and Idaho hunting seasons prohibit the hunting of wolves at night.

Basically, there are two ways to hunt wolves. The first way is to keep a tag in your pocket because you never know when you might stumble into a pack of wolves. This is extremely common on caribou hunts because the wolves follow the migrating herds. We always council hunters to get a wolf tag when you’re on a caribou hunt. The second way to hunt if you’re interested in shooting a wolf is to wait for the wolf to come to you. In Canada, they can bait in wolves, but in Idaho & Montana wolves are currently considered a game species & baiting is not allowed. That doesn’t mean you can’t get a wolf to come to you though. Predator calling can work very well.

Patience is Key when Wolf Hunting

Don’t expect to plop down on a hill five minutes from a well traveled road and call for 10 minutes and get a wolf. Wolves are extremely cautious and they also might be coming from a mile or more away. It pays to wait and calling for 30 minute to an hour or more can pay off. Remember, as soon as you stand up, you’ll probably spook anything coming in. If you would have waited 5 or 10 minutes longer you might have seen that wolf coming over the hill. It might take a few times, but if you bring the right gear, use the right rifle, and try out some of the calling techniques listed below you’ve got a great chance at getting a new wolf skin rug.

Picking a good stand to call from is critical. Wolves have keen eyesight, and an even keener sense of smell. Pick a spot that will put you downwind when they come in, yet give you good visibility. Position yourself in a place where you have a clear view upwind, but where you can also see downwind. You should pick a high spot in the terrain so you a have a good view. Wolves can hear calls from over a mile away, so the farther you can see the better chance you’ll have of spotting a wolf on its way. This will give you more time to prepare for a shot and also lets you see how the wolf is reacting to your calls.

Other things to keep in mind when picking a stand are to look for sufficient cover. The best time of day to get setup in your stand is early morning just before the sun comes up or later in the evening because wolves are most active at night.

Wolves DO Respond to Predator Calling

Calling a wolf is much like calling a coyote. Calls that work can range from a squeaker that imitates a field mouse to a cow elk call. Perhaps the most popular, and arguably most effective are the calls made to imitate the death squalls of a cottontail or jack rabbit. While a rabbit might not seem like much of a meal for a wolf, it’s still an enticing, easy snack.

Wolves, unlike coyotes, often prey on elk, and can also be called in with the same cow elk call you would use to bring a big bull elk in with. There doesn’t even have to be a hint of distress in the calls for predator calling to work. With all these options, you can use whatever call you’re most proficient with or have handy. If you’re elk hunting, always have a wolf tag in your pocket!

Howling for Wolves is a Great Wolf Hunting Tactic

It’s no secret wolves like to howl. Combine that with their fierce territorial behavior, and you’ve got a recipe that can put a whole pack of wolves in your lap. Most hunters just use their voice to howl for wolves. It’s no secret wolves like to howl. Combine that with their fierce territorial behavior, and you’ve got a recipe that can put a whole pack of wolves in your lap. Most hunters just use their voice to howl for wolves.

Putting it all together

Once you’ve chosen your stand, sit in a way that gives you the widest shooting window with the least amount of movement. Stay still once you’ve found your spot! Often, we start off with a howl, and quickly get a response back, you may want to just continue howling. If the responses sound like they’re getting closer keep it up. If they don’t, or you didn’t choose to howl at all, it may be time to use a game call like an elk or rabbit. For rabbit calls, it’s good to call aggressively at first for 1-2 minutes at a time and then lay off for a few minutes. Repeat this process and continue even if you see a wolf coming in from a long distance.

When a wolf gets with in a few hundred yards, simply squeaking with your lips may be all it takes to lure it in. If the wolf is looking your way, try not to move at all. As soon as the wolf is in a range that your comfortable shooting, take the shot. The closer the wolf gets the more likely it is to pick up your scent or see you. If you miss the shot, a bark or a quick howl will sometimes stop the wolf long enough for a second shot. Miss again and you’re probably out of luck.

If you do take a wolf in the first shot and your hunting with a buddy that has a tag too, don’t jump up just yet. Making a yip or whining sound like a hurt pup will likely bring other members of the pack that are close by running and your buddy will get a chance to harvest a wolf too.

It’s a good idea to get proficient shooting long range and to have a good rifle setup. Opportunities for wolves do not come easy, so be prepared to take advantage of them when they present themselves.