Roosevelt elk inhabit the rainforest located in northwestern North America, from British Columbia, into Washington, Oregon and Northern California. They also exist on Alaska’s Afognak and Raspberry islands, where bulls have been recorded weighing in excess of 1,300 pounds.

Bulls can live into their teens and tip the scales to over 1,200 pounds, and mature bulls average almost 900 pounds on the hoof. They commonly run at least 200 pounds larger than a Rocky Mountain bull. Roosies, as the locals know them (pronounced like “rosey”, are darker-colored than their smaller-bodied and more abundant cousin, the Rocky Mountain elk. The antlers of mature Roosies are also darker, more massive and compact, than those of Rocky Mountain bulls.

President Roosevelt is believed to have established the Olympic National Park specifically for the preservation of the species. Thus the alternative name of the subspecies: Olympus Elk.

Since they live in such THICK rain forest habitat and don’t typically bugle much, Roosevelt elk hunting isn’t easy. Despite the difficulty of hunting them, our hunters have had great success on solid bulls! In 2009, our outfitter took the New World Record muzzleloader Roosevelt elk. Scoring 372″ SCI. 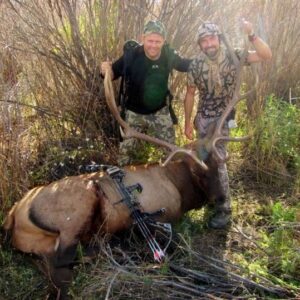 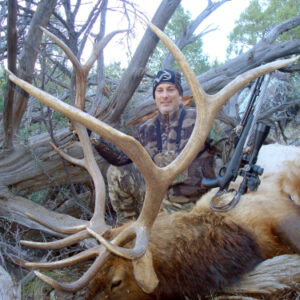 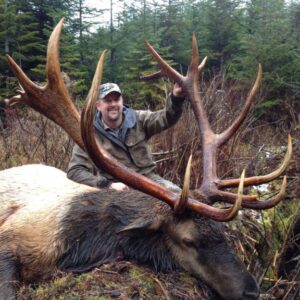