Hunting turkeys had become mostly a springtime activity across much of the U.S. in the 1970s after centuries of the sport were traditionally reserved for the fall. Spring is considered an “easy” time to hunt turkeys. Larry Case, a Department of Natural Resources officer in West Virginia, told us that gobblers don’t just sit around waiting to be harvested in the fall like they do in the spring.

The turkey population was scarce in the early 1900s, prompting most states to outlaw spring sessions and the relative ease of further decreasing their numbers. But several wildlife organizations combined their efforts to increase the turkey population over the past three decades. SportDOG

, a gun dog training equipment company, funded a youth group in Illinois back in 2010 which helped restore nesting and roosting areas for turkeys.

How to Turkey Hunt in the Fall with Turkey Dogs Some hunters use a setter or pointer to locate and scatter the turkeys. It is illegal, however, in several states to use a dog for hunting turkeys, so check your state’s laws before bringing along your four-legged partner.

There are 40 states that offer fall turkey hunting, with most of the ones outlawing it being in the Southeast, according to National Wild Turkey Federation (NWTF). As the weather gets colder, turkeys flock close together to keep warm and protect themselves from predators. Hunters quietly comb the woods searching for these flocks, before rushing towards them to force a scatter.

Some hunters use a setter or pointer to locate and scatter the turkeys. It is illegal, however, in several states to use a dog for hunting turkeys, so check your state’s laws before bringing along your four-legged partner. There is great debate among hunters as to whether dogs should ever be used for turkey hunting. Some question the ethics of using a dog, while others dismiss these claims, saying the dog’s only job is to locate and scatter.

The goal at this point is to try and call at least one of the turkeys back to the spot of the original flock. Interestingly, a properly-trained turkey dog will sit in the hunter’s lap inside a bag as they wait for their prey to return. Some states, like Pennsylvania, have a one-bird limit as far as harvest, which makes hunters think twice about keeping a dog for such a limited purpose. But Pete Clare, owner of Turkey Trot Acres in New York, told the Pittsburgh Post-Gazette the dog adds an element to the experience that makes it enjoyable even if you don’t get a turkey.

How to Turkey Hunt in the Spring

March and April are breeding months for turkeys, thus the perfect time to take advantage of the toms’ natural desires. You can usually tell the hens and toms apart because the latter is “bearded.” It’s best to get out early in the morning when the sun hasn’t fully risen. The idea is to locate the roost area and get as close as possible without alerting the birds of your presence. It is at this point you begin calling to lure the toms closer. Be ready for action, especially as the gobbling gets louder and the bird gets within range.

Harvesting your first turkey will not only provide food for a few days, but will get you hooked on a sport that is making a comeback in America. Make certain to only harvest male turkeys so the gobbler population continues to be abundant enough for two hunting seasons. 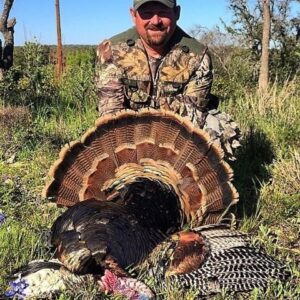