The Chinook or King Salmon (Oncorhynchus tshawytscha) has been a long sought after sport fish for many anglers and for good reason. King salmon fishing in Alaska is challenging. But the effort is worth it, because they fight hard and they can grow to enormous size! Understanding their life cycle and when King Salmon run in Alaska is critical to determining when you should plan your fishing trip.

When do king salmon run in Alaska?

If you time the run right, get ready for the best fishing you’ve ever had! Factors such as water levels, air temperature, and tides play a crucial factor to determine the peak of the run for any given year.

In general, the King salmon spawning run occurs during the summer months in May through July.

In most Alaskan rivers, the King salmon arrive first; they will stay in the river in “staging areas” before spawning in late July-August. We think that June through mid-July is the best time of year to go salmon fishing in Alaska if you want to target Kings.

Once they begin spawning it is best to leave them alone for many reasons.

These awesome fish must endure many obstacles to survive. They start out as eggs in the rivers, journey to the ocean to grow, and then return as adults to spawn. They have a myriad of predators, and only the strong or sometimes lucky will survive to recreate. If we want our kids and grandkids to experience King salmon fishing in Alaska, then we need to be conservation minded. 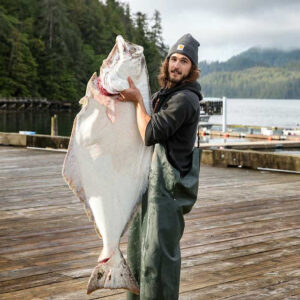 Rated 5.00 out of 5
PREMIER OUTFITTER The salmon life cycle is an incredibly important part of the ecosystem. After the salmon spawn and die they give back nutrients to the river, fertilize the riverbanks, and offer food for bears and other animals. Every Alaskan King salmon starts out as an egg in a gravel bed in a freshwater river or creek.

These eggs will “incubate” for a certain amount of time typically 90 -120 days depending on the temperature of the water. During this process, the salmon inside the egg develops its eyes, spine and tail.

Once this process is complete, the egg will hatch and the salmon begins life.

Once the egg hatches, the salmon enters the alevin stage. These fish are still quite small and remain in the gravel beds safe from predators.

Salmon in the alevin stage have a noticeable orange yolk sac attached to their bodies that provide nutrients. As the nutrients in the yolk sac are depleted toward the end of this stage, the salmon develop their mouths and small oval-shapes on their sides.

After this process, the fish start to move away from the gravel beds to look for food.

This stage begins once the salmon leaves the gravel beds where they were born. They are only 1” long when they emerge from the gravel and dark in color with noticeable “parr” marks that help to hide the fish from predators such as trout and birds.

They typically stay in slow waters and protected areas or well-vegetated stream banks feeding on plankton and insect larvae. These fry will stay in the river for up to a year. Only 10 of 100 fry find adequate habitat.

Once the “parr” marks start wearing away and the salmon starts moving toward saltwater, it enters the smolt stage. Fish in this stage are growing quite rapidly and are 3-5”.

They typically stay in the brackish waters at the mouth of a river to adapt to the salt water before moving off to sea. Once the salmon reaches a certain size, they are ready to migrate into the open ocean and begin their adult life.

Salmon are considered “adults” when they complete the migration from freshwater to saltwater. Kings reach sexual maturity in 3-7 years.

They will feed in the open-ocean on herring, pilchards, sand lance, squid and crustaceans. At this stage, King salmon grow incredibly fast and can double their weight in a single summer.

Kings can stay in the ocean for up to 6 years before returning to the same river they were born to spawn, most return within 4 years.

This is when the salmon will begin migrating back to freshwater where they enter the spawner stage. Salmon in this stage undergo tremendous physical changes, including their color.

King salmon change from a silvery grey color to maroon or red. The jaws of male salmon will also change to a hook shape, which is known as a “kype.” This is to help protect the spawning territory.

Salmon stop feeding once they enter freshwater, but they will attack your fly or lure out of natural aggression. They are able to travel many miles to spawning grounds by using the stored energy from their ocean residence.

Interestingly, all pacific salmon will migrate back to almost the same exact spot where they were born. A salmon can detect one drop of water from its home stream mixed up in 250 gallons of seawater. Salmon will follow this faint scent trail, with the aid of other methods back to their home stream to spawn.

Once a female salmon selects a spawning site, she rapidly pumps her tail to wash out a depression in the stream gravel. After the eggs are laid, the female uses the same tail movements to completely cover the eggs with gravel while the male or males fertilize the eggs with “milt”. These gravel nests in which the salmon deposit their eggs are known as redds. Over several days, females may lay several more redds in a line upstream.

If a salmon makes it to the spawning grounds without getting caught or eaten by a predator, they will complete the breeding process as described. If three fish return for every parent fish to complete this process it would be considered a good production.

Once this process is over, the adult salmon die off and therefore completes the life cycle. The current world record King Salmon is 97 pounds 4 ounces, caught in Alaska in 1985 by Les Anderson!

The largest recorded commercial catch was a 126 lb. King in 1949 in Alaska. Although in recent years there has not been a serious record contender 60-70 pound Kings are caught each year.

A more realistic goal is an average 30-50 pound fish that still feel like you’re trying to stop a freight train and prove to be a real challenge. It won’t matter if you’re salmon fishing with conventional gear or fly fishing.

Are you ready to go King salmon fishing?

We can hook you up with the best salmon fishing guides in the world.

GET MORE INFORMATION ABOUT A TRIP

Please be thorough so we can help you book the perfect fishing trip.

By booking with Outdoors International you will be in the right location, at the right time, with the right gear, and fishing with the right guide. Do you have a particular destination in mind? Is there a specific species you'd like to target? Do you need to stay within a budget? How big is your group? Etc. Listen to your guide; they have the intimate knowledge of their fishery and the species within to help you be successful.
Top Rated