Muntjac were originally residents of Asian deciduous and coniferous woodland where they are now endangered. Now they are a common species when hunting in Europe. They are the smallest of the six species of wild deer in Britain. Accidentally introduced to Woburn abbey in the 19th century which then led to being incorporated into the British Deer Society officially and recognizing them as a UK huntable deer species.

They have proven themselves very successful in establishing themselves in British countryside. As well as private gardens. Populations can reach very high densities and can cause a lot of crop damage. In the wild the life span can be up to 10 years old and captivity 16 years, but this is exceptional.

Muntjac differ from all other species of deer in Britain because there is no defined breeding season or rut time. They are capable of breeding from just 8 months old with a gestation period of only 7 months, normally giving birth to 1 fawn and are able to breed again within days after giving birth. Be careful when culling doe’s as they breed all year and you may not see a young fawn.

Although there is no actual muntjac hunting season, winter stalks in January to March when the grass is short are most productive. Early evening /morning hours tend to be the most productive either as a walk and stalk or from high seats. Unfortunately in the UK, bow hunting is illegal but for rifleman, the minimum caliber is .223 with a minimum bullet weight of 50 grains and a minimum muzzle energy of 1000 ft. lbs; the .243 Win being most common. 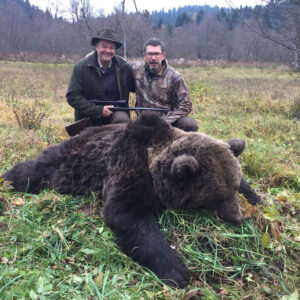 A common name for the Muntjac is “Barking Deer.“

This comes from the loud bark given when alarmed and or as communication between adults. Adult body weight ranges from 10 KG to 18 KG (22-40lb). Bucks (adult male) are slightly larger than Doe’s (adult female) but larger weights have been recorded.

Bucks have long pedicles with short antlers of about 5” or 10 cm long, shedding in May to July and growing new antlers over the summer. They have visible canine tusks about 1” long or 2-3cm, although smaller than Chinese Water Deer (CWD) tusk which can be more than 3-4 times longer and without any antler. Both bucks and does have very large facial glands below the eyes. They have a short wide tail held high like a whitetail when alarmed.