Canada offers great hunting for both subspecies of muskox, the Greenland and Barren Ground muskox.

If you want to experience an Arctic adventure, go muskox hunting in Canada! This survivor of the last Ice Age is a unique animal, and hunting them will be the experience of a lifetime…rivaled only by possibly a polar bear hunt. 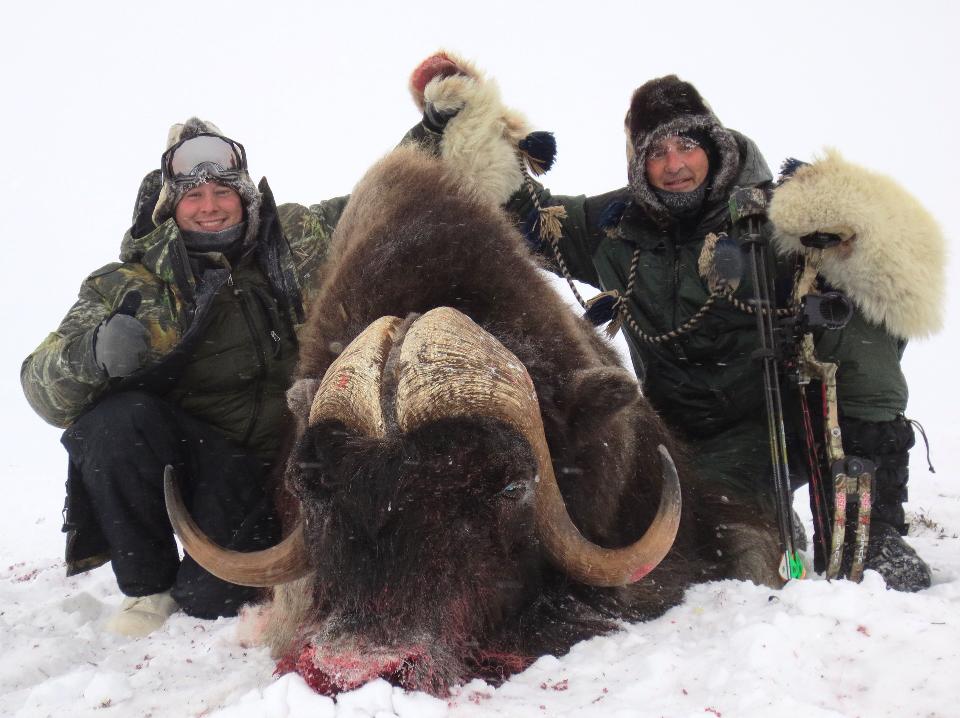 The Barren Ground muskox is classified by SCI, and is only found only on the mainland of Nunavut, Canada. Their range includes the region from the Arctic coast of Queen Maud Gulf to the north, and from Cape Bathurst in the west to the Sherman Basin in the east. Our outfitter has been hunting this area since March of 1986, and entries from their hunters dominate the the Boone and Crockett and SCI record books.

These are Spring Hunts

Mid-March to Mid-April – Spring muskox hunting in Canada is a true Arctic adventure, where you will experience the Inuit culture in the harshest environment on earth. You will hunt from a sled that is being pulled by a snow machine, which allows you to cover a lot of ground quickly in search of a trophy bull.

Cambridge Bay on Victoria Island near Greenland is the “Muskox Hunting Capital of the World”, and is home to the introduced Greenland subspecies of muskox. SCI does recognize them as “Greenland” muskox and this region has over 200 entries in the record book. Southern Victoria Island has a population of 30,000 muskox, and it is common to see anywhere from 30 to 40 muskox daily. This is an amazing archery hunt.

Mid-March to Mid-April – A spring muskox hunt is the best hunt for you if you want and Arctic adventure, and to experience the Inuit culture in the harshest environment on earth. The Inuit people assist our outfitters with their traditional hunting knowledge.

You will hunt from a sled that is being pulled by a snow machine, which allows you to cover a lot of ground quickly in search of a trophy bull. You will typically see more animals on the spring hunts than you will in the fall. Russ Meyer, co-owner of Outdoors International trailed this bull nearly two miles in 60+ mph winds and sideways rain before he was able to let an arrow fly..and can verify that the head and hide of an old bull muskox is kinda heavy!

Mid-August to Early September – If braving an Arctic spring hunt isn’t for you, maybe a late summer hunt is more up your alley.  This is the only area of Nunavut where the Greenland muskox can be hunted in August and September. This late summer package is ideally suited for individuals concerned about the weather conditions in March or November Victoria Island muskox hunting. What makes summer hunts awesome (other than the weather) is that the rut will be in full swing, peaking in mid-August. The bulls will be butting heads in competition for breeding cows. It’s quite a spectacle to behold! This is a fun spot and stalk style that is perfect for bowhunters. Hunters tend to worry that the hides will not be prime this time of year, but muskox keep their dense fur even through the summer months.

Mid-October to Early November – The fall muskox hunts are much like the spring hunts, but the weather isn’t quite as extreme. Depending on the year, there will be snow, and most lakes are frozen…but, the fall hunts aren’t as bitter cold as the spring hunts. You’ll be hunting via snow machines or ATV’s pulling an Inuit sled (Komatik), covering lots of ground looking for mature bulls. One great thing about fall hunts is you can combo them with a caribou.

Our clients hold three of the top five bulls in SCI from Victoria Island muskox hunting.

The Greenland subspecies of muskox that resides in Nunavut, are larger than those actually found in Greenland, and our clients consistently harvest very large, mature bulls. Our outfitter holds three of the top five trophies of the Greenland muskox as listed in the SCI Record Book. Corey Goss with the No.2 entry has a score of 84 5/8 and both Doug Whitaker and Bob Underwood with a score of 82 3/8 are tied for the No. 3 spot.

*Prices subject to change without notice, so lock your price in with a deposit asap.

Have you been on a trip with us or one of our outfitters? We’d love to hear how it went. Please fill out a trip report.

With travel insurance through Travel Guard you’ll have valuable coverage that travels with you and your family. We’re America’s leading provider of travel insurance plans and assistance programs and we’re here to help you 24 hours a day, 7 days a week.

Have questions about one of our hunts?

We’re here to help you book the perfect trip, and our advice doesn’t cost you a thing.